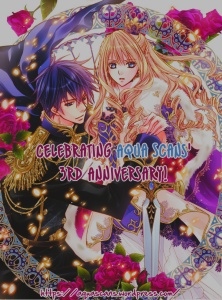 Usually scanlations have special releases for holidays such christmas and new year, but we’re in a special condition, you see the founders (Mizuouji and Hidden Masked) somehow thought it would be fun to start a scanlation team just in the middle of the two, since she pretty much had anything else to do in the middle of the holidays.

Time sure flies, to think we’re already on our third year and we are still around… I still feel like a newbie who can’t level scans to save her life.

I want to thank, as founder and as spokeswoman of aqua, to all our raw providers, cleaners, typesetters, translators and proofreaders who are all working so hard even thought they’re so busy to keep this project alive!!; and to you, our reader, who always have time to read and even comment even though it’s hard to keep with the conversations sometimes. Thank you for reading, thank you for stay around, we really appreciate every single word of encouragement, every donation and even the suggestions around the place. Thank you.

And now a special announcement!! Today was released the Aria Magazine issue of February that dropped a bomb in our staff’s hearts. You see, remember that series? the one with the super queen? the one that got a horrible and axed ending? Well, guess what, seems like the first two volumes are selling so well that we’re getting THE SERIES RESUMED NEXT MONTH (source).

Finally, to honor Aqua’s name today we have a special release (wow, one more than last year)! 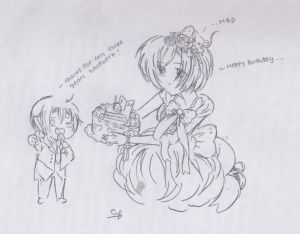 A Mika (majo no shinzou) birthday card from Maid Chan, Thank you very much!! We really love it!!

30 thoughts on “Celebrating our third anniversary! (and a major announcement)”

Thanks for dropping by our blog!